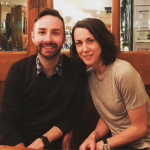 In this post, Sian and Brady draw on their study ‘Facebook Timelines’ which explores the role of social media in mediating and archiving ‘growing up’ narratives. Using Facebook they provide the fascinating example of analyzing longitudinal digital traces by working with participants as co-analysts encouraging them to ‘scroll back’ and interpret their own personal archives. On the subject, they have authored ‘Uncovering longitudinal life narratives: Scrolling back on Facebook’  and ‘Editing the project of the self: Sustained Facebook use and growing up online’.

In 2014 Facebook celebrated its tenth birthday. To mark this first decade, we edited a special issue of New Media & Society that reflected on the extent to which the site had become embedded into the everyday lives of its users. It was also evident at this point that there was now a generation of young people who had literally ‘grown up’ using the site. This prompted us to design a new research project, and a new research method in the process. Facebook Timelines is a qualitative study with young people in their twenties who joined the site in their early teens. We were particularly interested in this age group because they had used Facebook throughout their teens and many found themselves at a ‘crossroads’ moment in their life when they are beginning to think seriously about post-education working life and ‘professional identity’. Using a combination of qualitative interviewing, time-lining and the ‘scroll back method’, we worked with 40 young people to find out how they (and their friends) had disclosed their ‘growing up’ experiences on the site. In this respect, the Facebook Timeline (also known as the profile) was used as a ‘prompt’ and the years upon years of disclosures on the site acted as ‘cues’ for what often became elaborate and in-depth stories of teenage life.

One of our core interests here was how ‘growing up’ stories are recorded and made visible on social media. Given Facebook’s longevity, it has become a digital archive of life for many – a longitudinal digital trace. We wanted to interrogate this further by working with our participants as co-analysts of their own digital traces. How do young people make sense of these longitudinal digital traces? How do these traces persist and re-surface, years later, as people grow up and enter into new stages of their lives?

Time-lining: going back to pencil and paper

What key or critical moments have you experienced in your teenage years, since joining Facebook? As a period of turbulence and change, we were keen to ask this question and explore what our participants perceived to be those important, life defining events or rites of passage that have come to define them. A simple print out of a timeline enabled our participants to consider this question and to map out those moments as they remember them. These included: going to high school, leaving school, getting a part time job, going to a first gig, family weddings, births and deaths, going into full time employment, going to university, the beginning and end of relationships and all manner of important moments. Our participants were then invited to log into their Facebook profile using a laptop, tablet or phone, depending on the participants’ preference, to consider how the moments they recalled ‘mapped onto’ their Facebook Timeline.

The ‘scroll back’ method

At this point, our participants were asked to ‘scroll back’ to their very first post on the site. It is common for them to have an emotional response to early disclosures on the site; embarrassment being the most typical. For us, this was interesting because their response acted as the first ‘marker of growing up’ they encounter in the ‘scroll back’ and represented a form of self-reflexivity and self-realisation. In addition, their responses were physical: the covering of the eyes, a slight wince, even turning away from the screen when confronted with a younger self and evidence of their digital trace dating back some years. Consider a 24-year-old confronting their 16-year-old self, as mediated on Facebook. Once the ‘scroll back’ begins, participants click chronologically through their years of disclosures, opening up year after year of their Facebook archive provoking narration and description of the content. This method serves to be empowering for the participant as it places them in control of which moments they wish to talk about and which they do not; which to discuss and which to pass over. However, because of the sheer amount of content – much of which is forgotten (particularly the earlier stuff) – there is a danger that participants will be confronted with challenging, difficult moments from their past at which point the participant is asked whether they wish to continue. Often they do, seeing this as a ‘therapeutic moment’ to reflect with hindsight on the event. Some saw it as an important life moment and thus it remained in their Timeline.

Importantly, we recruited our participants not just as interviewees or ‘subjects’ of observation. We worked with our participants as co-analysts of their own digital traces. Having our participants sign-in to their own Facebook accounts and scroll back through their Timeline profiles in front of us allowed us to see their Facebook histories ‘from their perspective’. If we were to analyse these digital traces without the involvement of the participants themselves, we’d be limited in multiple ways: first, in terms of what we could actually see, but second – and for us, more importantly – in terms of the stories that certain disclosures prompted. Often, our participants would be able to ‘fill in the blanks’ or provide crucial context and explanation for in-jokes, vague status updates, or obscure images that we alone would have had little capacity to fully understand. Thus, our analysis here really hinged on the involvement and insight of our participants themselves.

‘Scroll back’ and narratives of growing up

The Facebook Timelines project has clearly under-lined the significance of Facebook in the lives of young people in their twenties as a key platform for sharing their everyday life experiences. While some participants claim to be ‘partial’ Facebook users today amidst broader claims of ‘Facebook fatigue’ and a more complicated ‘polymedia’ environment including Instagram, Snapchat, dating and hook-up apps, and so on, scrolling back through participants’ Timelines has affirmed just how embedded and central Facebook is in their lives. Further, their changes in use from ‘intense’ to more silent (but still present) ‘disuse’ tells us much about their growing up and claims to being ‘more mature’ equating to disclosing less. Additionally, the amount of ‘memory work’ the site is doing on their behalf (so many forgotten moments were unveiled through ‘scroll back’) makes getting rid of Facebook for good almost an impossibility.

Facebook Timelines offer immense opportunities for longitudinal researchers, however the depth of many profiles certainly presents analytical challenges as essentially these are not profiles that have been created for a research project. For us, and as we mention above, ‘analysis’ of the Timelines was embedded into the scroll back method from the start with participants analyzing their own digital traces as a core part of the research process. Drawing on Thomson and Holland (2003) we then considered the data ‘cross-sectionally in order to identify discourses through which identity is constructed, and longitudinally at the development of a particular narrative over time’ (2003: 236). We did this with the participants as they scrolled back, then cross-referenced these discourses with other participants by analyzing the interview transcripts using the themes defined by our participants (for example, relationships, travel and education). Overall, we felt this approach gave our participants a genuine feeling that they had witnessed, unfolded and given voice to, a self-narrative of their growing up on Facebook.

In this article, we expand on the ‘scroll back’ method in much more detail:

These publications report on findings from our study:

Further background to our research: